The Diary of the Dead 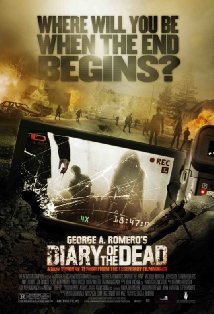 This is another of Romero's, the king of  the zombie movie, films.  I was very excited about seeing this movie as there really has been nothing Romero has done that I haven't enjoyed.  This movie also got very good reviews and I assumed I would be watching an amazing movie when I sat down to see this.

I know that people may hate me for this, but I didn't enjoy this movie.  This was another one of those Blair Witch style the protagonist is holding the video camera so the movie watcher feels like they are actually in real life type of movies.  I know zombie movies have been done to death (pun intended) and zombie movie people are looking for a new way to explore the horror of the zombie, but this is just getting old.  Its not a new take on the zombie if its using something that's already been done to death and wasn't that good to begin with.  Blair Witch really wasn't that good.  I think I've only seen one or two movies done this way that haven't made me want to hurl.

Outside of the filming, there was nothing else I liked about the movie.  I didn't care about any of the characters in the movie, which is a big problem for me.  I have to actually care if people live or die or why am I watching the film.  This movie was about a group of film students making a movie who are attacked by zombies, flee and have to survive amidst zombie mayhem.  The film is driven by dialogue that was boring and characters that were uninteresting.   This movie wasn't terrible.  It was absolutely adequate, which is worse than terrible for a zombie film.  A bad zombie film can become campie b-grade fun that you can laugh at and enjoy.  A good zombie film is amazing.  An adequate zombie film is flat.   I will always love Romero and I bought this for my Romero collection, but I won't be watching this one again.
at 5:47 PM