The City of the Living Dead or The Gates of Hell 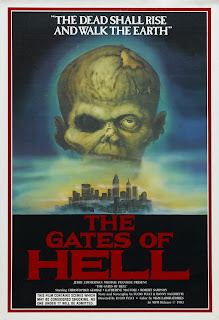 This was Italian master Lucio Fulci's final zombie film. It was released in Italy as The City of the Living Dead but was called The Gates of Hell in the states.   Most versions now call the movie The City of the Living Dead. Zombie is Fulci's most famous film, but this film, made in 1980 actually did better at the box office.  Most Fulci fans would also say Zombie was his best film, but I have to say I loved this film and this is my favorite of Fulci's work.  It is absolutely wonderful from start to finish.  The film opens in a lovely cemetery.   A priest hangs himself.  At that moment, somewhere else, a medium goes into a trance and seems dead.   She rises from the dead with knowledge of  an upcoming apocalypse in which a priest has opened the gates to hell by hanging himself.

The medium teams up with a reporter to find the town of Dunwich (yes, this film was greatly inspired by H.P. Lovecraft).  Their plan is to kill the priest zombie and thus stop the armies of the living dead from rising from the grave and destroying the world.  This seems easy enough.  These zombies have extra powers, however.   They can stare at their victims and make their eyes bleed.  If you look at them long enough,  your intestines will start oozing out of your mouth.   They can also teleport.

This film is campy and the dubbing is terrible, but it is worth it.  What wonderful horrors can you expect in Fulci's masterpiece?   A great scene involving a drill bit to the head,  intestines oozing out of victim's mouths,  lots of squishy brain scenes,  a scene in which it rains maggots, and zombies that look like they are covered in vomit and worms.  This is an absolute must see for any zombie movie lover.
at 10:43 PM 2 comments

Labels: Fulci, Italian Zombie Films, Plants vs. Zombies, The City of the Living Dead, The Gates of Hell 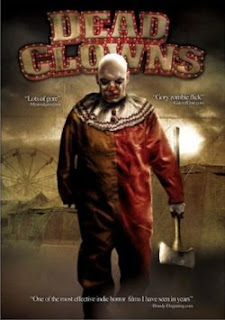 It has been a while since I indulged my zombie passion.  Real life has pulled me away from zombies.  Its tragic really, but I'm back on routine now and spent my morning workout watching Dead Clowns directed by Steve Sessions.  I found this gem in a going out of business bin at Hollywood Video for $2.  I'm not sure it was worth it.  I had high hopes for this one.  I love Killer Klowns from Outer Space and I was hopeful that this would merge zombies with the silly horror of my youth.  Unfortunately,  Dead Clowns was done with the slow, steady pace of a movie that intends to truly horrify its audience.  The movie has potential, however.  The potential was never realized in this film, but that may be because of lack of funding and resources rather than lack of ability.  It is clear from the beginning that the director has seen Fulci's early zombie classics and paces his movies with the same slow build up.

Dead Clowns begins with a hurricane.   A small town has been evacuated and only the brave remain.   The movie spends a considerable time with build up and character development.   The story of  a circus car accident during another big hurricane is told.  All the clowns died in the storm.  They went down with the calliope.  Even though this story was told straight, with no intention of humor,  I couldn't help giggle as a traumatized woman recited this silly story as if it were something scary. The movie progresses slowly from this story.   The characters endure the storm as the dead begin to rise. As the zombie clowns crawl out of the sand,  calliope music plays in the background.   Unfortunately,  there isn't enough character development in the world to make me care about these poorly acted characters.  So even though there are plenty of characters to kill,  I really couldn't care less.  The zombie mayhem begins with some beautifully, bloody death scenes and the gore in this film is pretty well done. However, the zombie effects weren't what I had hoped for.

Overall,  I would pass on this low budget zombie indie unless you are a die hard fan.   It has its moments and it certainly has potential, but it is still too rough to create interest and the premise of zombie clowns would have been better placed in a campy, tongue in cheek kind of film rather than a serious attempt at horror.   I'm still hopeful that some day someone will blend Killer Klowns from Outer Space with zombies,   but I haven't found it yet.  I guess I'll just watch the original Killer Klowns.
at 12:34 PM 1 comments