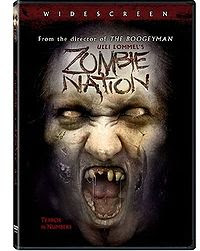 This movie falls into the avoid at all costs category.   I decided to watch this movie even though I had never heard of it because it had good cover art and the back made it seem interesting.  However,  the movie had no scenes that resembled anything from the cover and the back was probably about some other movie the director liked because it couldn't have been about this movie.

This movie was about a serial killer who kills women who then come back to life to make a zombie nation and take revenge.  The acting is bad.  Not funny bad, but porn star bad.  The script is ridiculous and the movie has the feel of something made for less than five dollars.  Some zombie movies are so bad they are good.  They make you laugh and this is wonderful.  Zombie nation is not one of these movies.   It was flat and dead.  I fell asleep a coulple times during this movie and I'm someone who can make through all three Lord of the Rings played back to back.  It was a struggle to watch this movie and there wasn't even any good zombie action.   The zombie were hot chicks that had been brough back to find revenge while acting poorly.   There were no drippy, oozy, wonderful zombies.