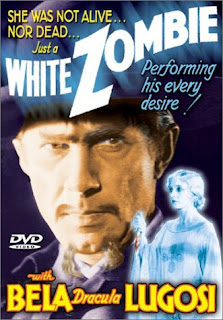 As far as my research shows,  this is the first zombie movie.  Made in 1932 and staring Bela Lugosi,  this is the prototype for all zombie movies.  These early zombie films are quite different to what modern zombie fans have gotten used to.   They are based on voodoo zombie legend and not on the living dead motif.   They play on Haitin settings and voodoo magic to brew a sinsiter atmosphere and create a fear that the characters could lose not just their lives, but their souls.

Lugosi stars as Murder, the owner of a Haitian plantation that seduces a young couple to come stay with them under the guise of kindness.  Unbeknownst to the lovestruck fools,  Murder (who would guess he's bad?) has been using voodoo magic to enslave the locals to work on his plantation, do his dirty work, and assist him in his nefarious plans.  As soon as Murder sees the beautiful lead actress, you know what Murder's diabolical plan is.  He wants to use voodoo magic to turn this beauty into his zombie love slave!

This movie is slow and is much like watching  any B-grade movie that comes from the thirties.  If you have seen Dracula or Frankenstien you know the pace that this movie will progress at.  It is overacted and Lugosi plays the role in the same melodramatic fashion he played Dracula.  I'm not a huge old B-grade horror fan so I will never have a passion for White Zombie, but I see in it the seeds of the movies to come.  In this tiny gem of a movie,  lies the beginning of all the zombie mayhem I love.   Every zombie lover should see this film at least once so they can fully understand the evolution of the genre.
at 2:33 PM