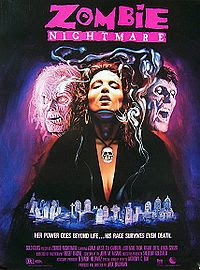 Almost everything about this film is really, really horrible.  The acting is just silly.  The plot is ridiculous and the writing is beyond bad.  This is one of the worst zombie movies I have ever seen.  It is saved by the fact that it has moved beyond regular crap into a realm of horrible films like Attack of the Killer Shrews and Plan 9 from Outer Space.   It is so bad it is actually very funny.   There are wonderful scenes like the one in which a police officer interogated a rape victim whose rapist had his removed by a zombie in midrape in which the officer asks,  "What were you doing in an alley in the middle of the night with a man with a knife if you didn't want sex?"  I still don't know the answer to that question.

Staring Adam West from TV's Batman in a role that makes no sense and Tia Carrere in a role that makes even less sense,  the plot of his movie stumbles around in between voodoo rituals and body builder zombies into a climax that just left me thinking,  "What is going on?"   If you love B-grade cinema and want a good laugh,  this movie is perfect for you, otherwise leave this one alone.
at 9:05 PM