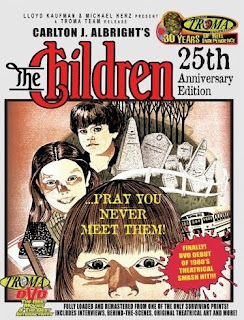 Sometimes there aren't words to sum up a movie.  This is one of those movies.   I'm not saying that I've been awed by the power of this film, but rather I was so bored I think I dozed off half way through.   The Children was made in the 1980 and tells the story of children who are accidentally irradiated.   A school bus full of children vanish and the town is surprisingly calm about it.   They assume their children are at friend's houses.  There are several conversations in which mothers ask each other about their missing children in a casual almost half hazard tone.

Finally,  the children come back and the mothers run to their young to have them suck the life from their bodies.  The children kill the town with their evil, deadly hugs.   The town doesn't seem to notice this either.  People are dying left and right.  Children are missing but everyone seems unaware of the doom that is creeping towards them.  When the heroes are finally beseiged by hordes of zombie children,  they don't even lock all the windows.  They kind of just shut the doors and hope for the best.   They put their one living son to bed and leave him completely unalone while they go into the kitchen and bicker.  Meanwhile,  the kids sneak into the other child's room and kill him.   It is mind boggling the idiocy and apathy that drive the plot of this less than b-grade film.   View this film at your own risk.
at 7:05 PM