The Zombie Pub Crawl and Poultrygeist 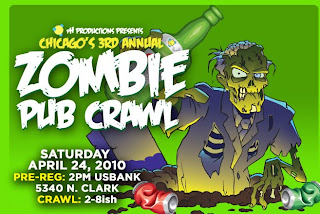 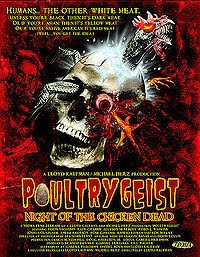 I have not written about zombies in some time now.  It really is terrible since I've had some wonderful zombie experiences over the last few weeks.  First,  I was able to attend the Chicago Zombie Pub Crawl!  This was probably my perfect moment.  At first,  I was disappointed.   People in zombie costumes met at the first pubs.  They were quiet and seemed somewhat lost.  However, as the beer flowed and the undead migrated from one bar to the next,  the moaning and stumbling began.   Zombies reached out for unsuspecting strangers crying out for brains.  It was wonderful!  If you are ever in the Chicago area during the zombie pub crawl,  it is definately worth the trip.

While I was in Chicago,  I was also exposed to the mesmerizingly bizarre, sex-filled, violent zombie chicken movie Poultrigeist.   I thought I knew B-grade movies fairly well, but this was my first exposure to Troma films.   They are famous for killer penis scenes, graphic sex, and mind bogglingly silly gore.  Poultrigeist has all of these things, right down to the giant, chicken headed, zombie penis that broke free from a zombie, chicken woman and went on a rampage.  The plot of this movie really doesn't matter, but for those who are curious.   A fried chicken chain (like KFC) builds a restraunt on an ancient Indian burial ground and zombie chickens are born amidst lesbain sex scenes and silly musical numbers.   When the zombie chickens take over,  the violence is amazing and the rest really doesn't matter.   I really don't know how to rate this movie except to say that if killer, zombie chicken penises and lesbian sex sound enjoyable to you,  you will like this movie.  Otherwise,  you might just want to watch it to know how strange film can be.
at 8:22 PM