The Night of the Comet 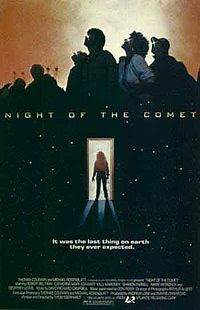 The Night of the Comet is a mixture of several different genres.  It is a zombie film, an apocalypse film, and a science fiction comedy.  As a child,  this was one of my favorite movies.  I was nine when this came out and I think I watched it at least twenty times.   As an adult,  I still like this film that was voted number 10 in Bloody Disgusting's Top 10 Doomsday Horror Films in 2009.


The story of this film is more complex than most zombie films.   Everyone is excited to see an extraordinary comet.  There are comet parties and gatherings of all sorts.  The two heroins in this film are two teenage girls that could care less about the comet.  They hate their stepmother and they both flee her comet party and end up sleeping in metal structures.  They both awake to silence.  The world is empty and there is red sand in all the places people had once been.   The two girls find each other and come to the conclusion that the comet killed everyone on earth, but spared them because of the metal containers they slept in.   Of course, they aren't completely alone.  The comet also turned some of the population into rotting, putrid, hungry zombies.  As the girls run from these zombies,  they meet a helpful man who is romantically partnered with the older teen, raid the mall for new clothes, and end up with a government group that promises them sanctuary.  Of course,  there is not sanctuary.  The government group is turning into zombies themselves and they believe the girls' blood will save them from their zombification.  Many chases and close calls follow, but the girls are victorious and escape into the sunset with the last two men on earth.

What more could anyone want?  The acting isn't that bad and the plot is interesting.  It is funny and it keeps your heart racing from time to time.  Although this isn't a traditional zombie film,  it is still a fun addition for any zombie movie addict.
at 8:46 PM