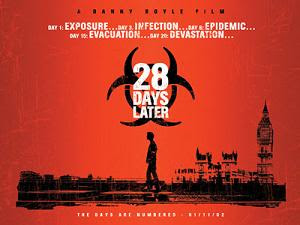 28 Days Later is one of my favorite movies.  I can watch this movie over and over again.  Most people I talk to call 28 Days Later a zombie movie.  Granted, they aren't zombie movie experts, but they don't separate zombies from the infected.  If we are being honest,  the movie flows and is structured like most post apocalyptic zombie films.  There are flesh hungry mostly dead people wandering the world spreading their living death.  These flesh hungry monsters destroy and eat anyone they can catch.  Like many of my favorite zombie films,  this movie explores elements of human nature and questions what defines us as people.  When all the rules are gone,  people become the real monsters.

All of this said,  strictly speaking the flesh hungry monsters chasing the heroes in this movie are infected with a virus called the rage.  They aren't the dead reanimated.  They are rotting, fleshy sacks.  Their hearts are still beating.  There have been several movies like this lately.  Quarantine has a similar plot line about "infected" people that are driven to act much like zombies.  So my question is,  are these films that act almost exactly like zombie movies, zombie movies?  Certainly a zombie lover can enjoy these movies, but can we talk about them as zombie movies or do we need to put them into a category of their own?  Should we call them infected movies?  Flesh crazed sick people movies?  What are these films?
at 8:36 PM