The Dead Next Door 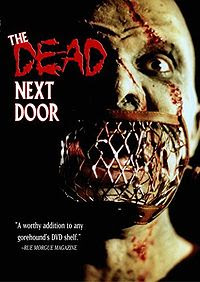 I'm going to be completely honest.  I fell asleep half way through this movie.  It wasn't too terrible.  I've certainly seen worse.  The premise was actually kind of interesting,  although the acting was horrible.  This is a zombie movie set in a not so distant future in which the living dead are among us.   A zombie squad, which is hated by a cult of zombie loving religious freaks, is assigned with the task of keeping the citizens safe from growing hordes of zombies.

This movie was produced by Sam Raimi, whom I usually love, and released in 1988.  It was shot on 8mm film and has a grainy quality that makes it seem more iinteresting than it actually is.  It is gory and violent and the effects are good.  I really should have loved this film.  Sam Raimi and the living dead are a great combination.  I felt, however, this movie was a big disappointment.  It just lacked qualities that would make me care.  I think it was the characters.  In order for me to care if people live or die,  I have to believe they are real and find them at least a little interesting.  This moving didn't make me do that.  I guess blood and guts and zombie effects aren't enough sometimes.  I fell asleep.  I had a good nap, however.  I know some zombie lovers adore this film and I certainly don't hate it.  I just found it sleepy.
at 1:29 PM