The Tombs of the Blind Dead 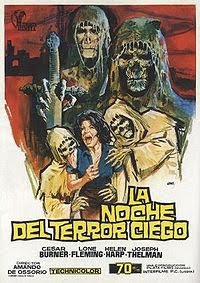 This Spanish Zombie classic is known for its slow pace and beautiful settings.  It is also known for its gratuitous half naked girls and bikini shots.  There are lots of screaming women having their clothes torn from their bodies in this 1971 zombie, cult classic.   It is not a brilliant film, but it is worth seeing at least once.  The plot for this is wonderful.

A young couple is vacationing when they meet a bikini clad beauty that the boyfriend finds attractive and the girlfriend had a lesbian affair with years ago.  The boyfriend invites the bikini, bisexual beauty with them on their train trip and the girlfriend becomes crazy with jealousy.  She eventually leaps from a moving train to escape her boyfriend's flirtation with her ex-lesbian lover.  As unwise as this may sound,  it is actually much stupider than it sounds.  She jumps from a moving train in an isolated nowhere somewhere between hell and France.   She finds a ruined old castle and ,as there are no people anywhere, she decides to get undressed and camp out in it.  She plays the radio and relaxes as the blind dead rise from their graves to devour her.  This describes every vacation I've ever had.

The blind dead are Knights Templar that were hung for their satanic crimes while birds ate out their eyes.  They rise from the dead nightly in the exact castle where our young heroine is camping.   She is eaten and her bisexual friend and boyfriend come looking for her.   Blind, zombie madness follows.   The most interesting parts of this movie use the combination of atmosphere and silence to create fear.  The zombies hunt by sound so there are many scenes where protagonists try to stay quiet.

Overall this is not my favorite zombie film.   It is silly and the characters are beyond stupid, but it is unique in its campy 70's charm so I have to say that I still enjoyed watching it.
at 10:08 AM

Labels: The Tombs of the Blind Dead, Zombies