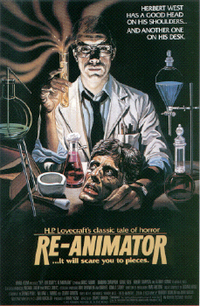 There is no better mixture then a not so subtle blend of Lovecraft and zombies. The Re-Animator is that mixture. Based on the Lovecraft story "Herbert West Reanimator, the Re-Animator is set at Lovecraft's infamous Mistkatonic University and follows two medical students in their quest to save their medical careers. The two medical students have been thrown together by odd circumstances. One is your typical hero type and the other is a mad scientist trying to find a way to bring the dead back to life.


After being expelled, the two medical students decide that the only way to save their careers is to raise the dead and prove to the world that they are geniuses and deserve to be doctors (Why not? It went well for Dr. Frankenstein). Of course, our mad scientist isn't really raising the dead as much as re-animating them, but it doesn't seem that much different to me. This movie is a gruesome shock fest and a half and the madness that follows this half-baked scheme is fabulous. From a medical director that has to carry most of his head around on a dish as he tries to rape the heroe's girlfriend to a zombie's intestines grabbing hold of our mad scientist med student and trying to kill him, the shocks are endless.
Re-animator is a campy, cult classic and is one of the best of the 1980's zombies films. It is funny and over the top and so shocking you have to laugh. If you like zombies or Lovecraft this is a must see film.
at 8:53 PM