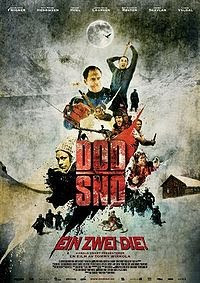 Wow.  I have to say that this movie is one of the must blood filled, intestine covered, dismemberingly violent Nazi zombie movies I've seen.  The movie starts when a group of young people go to an isolated cabin in an isolated Norwegian forest.  Did I mention this film is Norwegian?  Once the young people have arrived they engage in the typical activies young people engage in during horror films.  They drink beer, make fun of the locals, and have sex while taking a crap in the outhouse.  Far more vile to me is the scene in which a young woman licks her partner's fingers after he's crapped and not washed his hands.  Give me a good disemboweling any day,  this made me sick.

The plot is pushed a long by one young man's missing girlfriend.  After a disturbing and wierd local stops by to tell the young victims about a group of Nazis that were lost in the mountains,  one young man goes off to find his missing girlfriend taking the only vehicle with him.  While he is gone, his friends play loud music, drink more beer, and some get completely eviscerated.  The eviscerations are fun and the first girl to die is pulled into the poop hole and has to climb out with her intestines in her hands completely covered in feces.  It is all down hill from here.  There is a brilliant scene in which one young man catches hold of zombie intestines and uses them as a rope to cling onto while climbing a cliff.  There's another scene in which two of the characters go crazy with a machete and a chain saw.

After the only character I cared at all about was dismembered,  I lost a little interest, but that was OK because the zombies kept on coming and their relentless pursuit of these young people was a little satisfying for me because I really wanted to kill most of them myself in the first few scenes.  Overall, this is a fun zombie film.  It has some great zombie kill scenes and Nazi zombies are wonderful.  It has all the elements that make a b-grade zombie movie enjoyable.  They just should have held onto that one character that actually seemed to be worth saving a little longer so I wouldn't start cheering for the zombies so early in the film.
at 10:02 PM