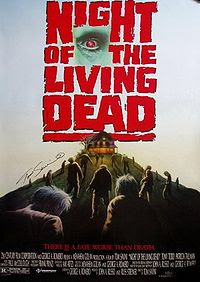 I read a recent list of the top ten zombie movies ever made somewhere and it was the first list I completely agreed with.  Featured prominently on the list was the remake of Night of the Living Dead.  Normally,  I dread remakes.  I hate the follow-up Omen and I am actually mad that they are remaking A Nightmare on Elm Street, but this movie is the exception.

The original Night of the Living Dead was made on a shoe string budget and at the time Romero was frustrated by his inability to fully realize his vision.  In the 1990 remake, Romero was able to complete his vision with the budget he didn't have to begin with.  The difference between this remake and other remakes is that the same director remade it.   This was not another example of Hollywood running out of ideas so they steal someone else's.  The same team that made the original Night of the Living Dead made this film.

I know that this is heresy to many zombie movie fiends, but I have to admit I enjoyed this movie more than the original.   I wanted to kill that limp, blond bimbo in the first movie and I was happy to see the remake driven by a dynamic female heroin that was able to handle herself.  I also appreciated the modern zombie make-up and affects. I believe that this movie belongs on the top 10 zombie film list because it is the completion of Romero's vision.  This is the way he would have done it the first time if he had any money.
at 6:00 PM

Labels: Night of the Living Dead