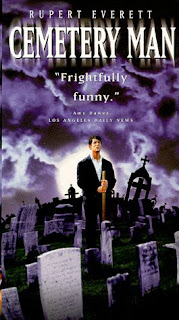 Released in the states as Cemetery Man, Dellamorte Dellamore is a deliciously funny and well written zombie classic. This movie is a work of art.  It is the grand ending to a wonderous time in which Italian film ruled the world of the zombies, and what an ending.  Staring Rupert Everett as the keeper of a cemetery in which the dead wake nightly, this film is so beautiful and so strange I rewatch it on a regular basis just to sink myself back into it's disorienting mists.

Rupert Everett's primary duties as the keeper of a gothic cemetery in which the dead rise nightly is to prevent the living dead from escaping from the cemetery and feasting on the flesh of the living.  He is assisted in his job by his endearingly simple friend Gnaghi.  Gnaghi is Everett's antithesis.   Everett's character is a bored apathetic loner who seems unaware that killing the living dead for a profession is in any way odd.  He is quick witted and funny and lives only to mock the small self centered world of the living that surrounds the cemetery until he falls madly in love with a beautiful unnamed woman played by the exquisitely beautiful Anna Falchi.  After Falchi is killed while having sex with Everett,  Everett's grip on reality begins to weaken.  Everett attempt to keep Falchi's zombi as a love toy, but is thwarted by the good meaning Gnaghi.  When Gnaghi falls in love with a zombi head,  Everett's grip on reality completely slips and he begins killing the living as well as the dead as he mutters, "The living dead and the dying living are all the same."   Every woman Everett meets becomes his lost love and every female part is played by the lovely Falchi.  This strangeness is compacted by the fact that no one seems to notice that Everett has become an insane serial killer that shoots people for no reason at all.   The plot unwinds from here into a disorienting and surreal ending that leaves you wishing for more. 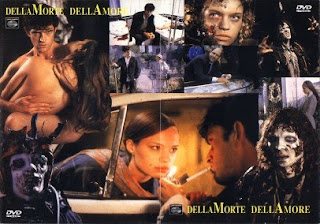 Technically speaking, this film is perfect.  It is beautifully shot and the director, Michele Soavi uses noteable close up photography and 360 degree camera shots through the cemetery to create an atmospheric zombie master piece.  The zombies have an unique, earthy look that seems to connect them to nature.  Roots protrude from their skulls and vines climb out of their bodies.

Some might say this movie isn't for everyone.  It is cryptic and philosophical and somes times outrageously nonsensical, but it is a gem of a zombie film that stands alone amongst others.  This film is a must see for any zombie film fanatic.
at 11:36 AM