Diaries of the Living Dead: A Double Feature 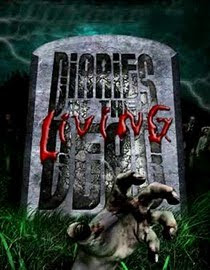 This was a double feature of possibly the crappiest and least watchable zombie films I've ever seen.   These films weren't even funny b-movie fun bad.  They were just terrible, put you to sleep, hit yourself in the face, painful to watch bad.  Both of these films probably had a combined budget of $53 dollars and they look like they were made by some of my high school friends while spoking pot.  Everything about these two films is bad.  The acting is painful.  I could and have done better zombie makeup affects for halloween costumes using the zombie make-up pack at party city.  The cinematography made my stomach hurt and I'm not sure if there was a real director at all.   The script was probably written by a group of high school dropouts whose only education was watching Night of The Living Dead over a hundred times.   In short,  unless it is your goal to see every zombie movie ever made, you can probably skip this double feature

The plots of these films were summed up by netflix as follows:  In Dead Summer, a Pennsylvania community is quarantined after the undead invade, leaving only a group of young survivors and the military to stop the walking corpses in their tracks. In Deadhunter, a construction project in Seville, Spain, dredges up zombies, and it's up to a Special Forces unit to end the carnage; Beatriz Mated and María Miñagorri star.
at 7:30 PM